Learn how Regolith is put together

The following graph generated by debtree provides the dependency relationships of Regolith packages and some of their notable upstream dependencies: 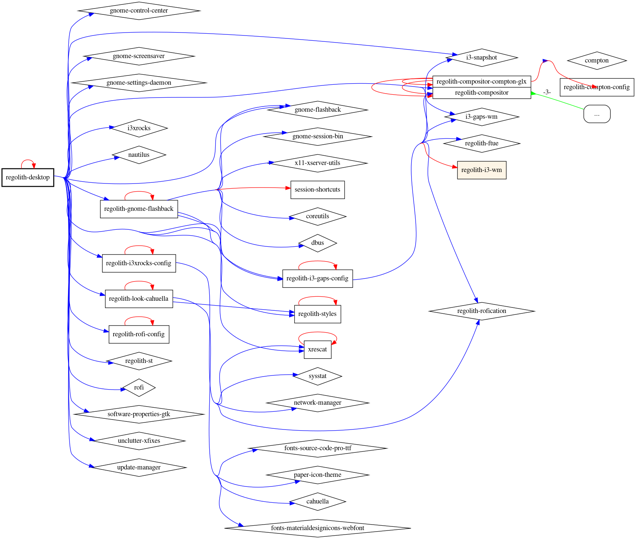 The installer is produced using the Cubic tool and providing the target ISO files as manual uploads to the Regolith Linux GitHub org. The README in regolith-cubic-conf has more details.

Regolith packages can be built, signed, and staged from the regolith-builder repository. See the project’s README for details.

When installing Regolith via PPA, the user has control and visibility over all package changes via their package installation tool of choice, likely apt, dpkg, or synaptic. However when installing Regolith via the Ubuntu Installer, the user does not see what packages are installed as part of that process. To cut down the size of the installer download, some packages were removed from the Ubuntu installer.

For Regolith 1.2, the following packages are removed from stock Ubuntu:

Of course, any of these packages can be re-added by the user after installation using a variety of tools including the app store.

For the 1.3 release of Regolith, changes from baseline Ubuntu are documented here.